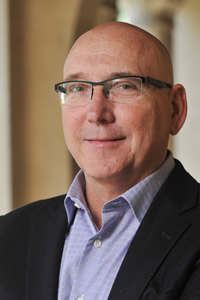 Douglas K. Owens, M.D., M.S., is a general internist and investigator at the Center for Innovation to Implementation at the Veterans Affairs (VA) Palo Alto Health Care System. He is the Henry J. Kaiser, Jr., professor at Stanford University, where he is also a professor of medicine, health research and policy (by courtesy), and management science and engineering (by courtesy). Dr. Owens is director of the Center for Primary Care and Outcomes Research in the Stanford University School of Medicine and director of the Center for Health Policy in the Freeman Spogli Institute for International Studies.

Dr. Owens is the former director of the Stanford University-University of California, San Francisco Evidence-Based Practice Center and currently codirects three training programs in health services research and informatics—the VA Postdoctoral Fellowship in Health Services Research, the VA Postdoctoral Informatics Fellowship Program, and the Stanford Health Policy Fellowship. He is a past president of the Society for Medical Decision Making. In addition, Dr. Owens chaired the Clinical Guidelines Committee of the American College of Physicians, a committee that develops clinical guidelines that are widely used and regularly published in the Annals of Internal Medicine.

Dr. Owens received a B.S. and an M.S. from Stanford University and an M.D. from the University of California, San Francisco. He completed a residency in internal medicine at the University of Pennsylvania and a fellowship in health research and policy at Stanford. Dr. Owens received the VA Undersecretary's Award for Outstanding Achievement in Health Services Research, as well as the Eisenberg Award for Leadership in Medical Decision Making from the Society for Medical Decision Making. He was also elected to the American Society for Clinical Investigation and the Association of American Physicians. He holds the Henry J. Kaiser, Jr., endowed professorship at Stanford University and received a MERIT award from the National Institutes on Drug Abuse for the study of HIV, hepatitis C, and the opioid epidemic.