Recommendations made by the USPSTF are independent of the U.S. government. They should not be construed as an official position of the Agency for Healthcare Research and Quality or the U.S. Department of Health and Human Services.

Return to Recommendation
Expand All
Preface

The final Research Plan is used to guide a systematic review of the evidence by researchers at an Evidence-based Practice Center. The resulting Evidence Report will form the basis of the USPSTF Recommendation Statement on this topic. 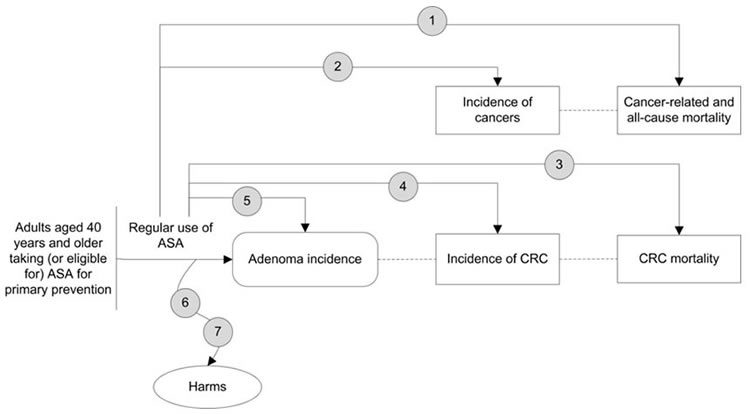 The figure is an analytic framework that depicts the seven Key Questions that will be addressed in the systematic review. The figure illustrates how aspirin chemoprevention may influence mortality outcomes (KQ 1) in adults age 40 years and older who are taking (or are eligible for taking) aspirin for the primary prevention of cancer. The figure also depicts how this intervention may affect intermediate outcomes, including cancer incidence (KQ 2), colorectal cancer mortality (KQ 3), colorectal cancer incidence (KQ 4), and adenoma incidence (KQ 5). In addition, the figure depicts whether aspirin use for chemoprevention has any potential harms (KQs 6 and 7).

Key Questions to Be Systematically Reviewed

* The following prevalent comorbid conditions that may be affected by aspirin use in terms of benefits or harms are proposed: diabetes, liver disease, ulcer disease, and previous gastrointestinal bleeding.
† Baseline cancer risk includes family history and other potential risk factors, if specified in the literature.
‡ Medications include nonaspirin, nonsteroidal anti-inflammatory drugs and selective serotonin reuptake inhibitors.

Contextual questions will not be not systematically reviewed and are not shown in the Analytic Framework.

The Research Approach identifies the study characteristics and criteria that the Evidence-based Practice Center will use to search for publications and to determine whether identified studies should be included or excluded from the Evidence Report. Criteria are overarching as well as specific to each of the key questions (KQs).

The draft Research Plan, entitled “Aspirin Use for the Prevention of Colorectal Cancer,” was posted for public comment on the U.S. Preventive Services Task Force (USPSTF) Web site from June 13 to July 10, 2013. The USPSTF reviewed and considered all comments received and made changes to the Research Plan in response. The most significant change is expansion of the scope of outcomes evaluated from colorectal cancer to all types of cancer. As part of the increased scope, three Key Questions (KQs 1, 2, and 6) and two Contextual Questions (1 and 2) were added to the Research Plan. A proposed Contextual Question on harms of concomitant medication use was integrated into the appropriate Key Questions.

Other changes included modifying the age range for the population of interest from age 18 years and older to age 40 years and older. This better reflects the potential target population for the intervention and aligns this Research Plan with the companion Research Plan on aspirin use for the prevention of cardiovascular events. In addition, the term “regular” aspirin use was substituted for “low dose” aspirin use to avoid confusion. The variety of dosages used in the trials will be characterized in the evidence report.