The Task Force has a large library of current topics and frequently receives nominations for new topics. The overall goal for topic selection and prioritization is to provide accurate and relevant recommendations that are as up to date as possible and to balance the overall portfolio of recommendations by population, type of service (screening, counseling, preventive medication), type of disease (e.g., cancer, endocrine disease), and size of project (e.g., update vs. new topic). The Task Force also prioritizes topics with the aim of updating topics every 5 years, in accordance with currency criteria established by the National Guideline Clearinghouse, an AHRQ-initiated public resource for evidence-based guidelines (www.guideline.gov). The criteria for new topic selection and for prioritization of active topics (discussed in detail below) are combined in an assessment of the topic as a whole, rather than used as part of a scoring system.

There are two types of topics in the Task Force library: active and inactive. Among the active topics, there are four categories for consideration: new, updated, reaffirmed, and referred. The processes for developing work plans, assessing evidence, and making recommendations for active topics are discussed in Sections 3−7.

New topics are topics chosen by the Task Force for review and recommendation that have not been previously reviewed.

Updated topics are topics reviewed in the past by the Task Force that have since undergone an update of the evidence and recommendation. The update may encompass all key questions on a topic (full update) or only a limited set of the key questions in the analytic framework (targeted update).

Inactive topics are topics the Task Force has decided to not update or keep active for one or more reasons (go to Section 2.4 for more details).

2.2 Determination of Scope and Relevance of New Topic Nominations and Topic Selection

Anyone can nominate a new topic for Task Force consideration or request an update of an existing topic at any time online at www.uspreventiveservicestaskforce.org/Page/Name/nominating-recommendation-statement-topics.

Topic nominations are first considered by the Task Force's Topic Prioritization Workgroup, which then recommends selection and prioritization of new topics to the entire Task Force.

The Topic Prioritization Workgroup first considers whether newly nominated topics are within the scope of the Task Force, using the following criteria:

To further specify the situation that is the object of its concern, the Task Force has adopted the Institute of Medicine's definition of primary care:

Primary care is the provision of integrated, accessible health care services by clinicians who are accountable for addressing a large majority of personal health care needs, developing a sustained partnership with patients, and practicing in the context of family and community. This definition acknowledges the importance of the patientclinician relationship as facilitated and augmented by teams and integrated delivery systems.

Topics that are within the scope of the Task Force are then assessed for relevance using the following criteria:

Based on the above criteria, the Topic Prioritization Workgroup assigns each nomination to one of the following categories for consideration by the entire Task Force:

2.3 Prioritization and Selection of Active Topics

The Topic Prioritization Workgroup begins prioritization of an active group of topics approximately 3 years after their previous publication.

Step 1. A brief background paper on the topic is produced that includes the following information: previous recommendation statement, estimate of disease burden, relevance to prevention and primary care, recommendations of other guideline developers, existing controversy or gap between evidence and practice, and summary of a brief literature search for new evidence.

Step 2. The Topic Prioritization Workgroup reviews and discusses the background paper and places each topic into either the active or inactive category. Topics that are retained as active are considered for referral to other organizations (go to Section 2.5 for the process of referring a topic and Section 2.4 for the process of inactivating a topic).

Step 3. A request for feedback on all active topics and potential new topics is sent to Task Force members and partner organizations. Respondents are asked to categorize each proposed topic as high-, moderate-, or low-priority for review in the next 12 to 18 months, based on the following criteria:

Step 4. The feedback from Task Force members and partner organizations is considered by the Topic Prioritization Workgroup, along with the background paper, in assigning a tentative priority category for active topics. The four criteria listed in Step 3, along with resource requirements for the review, are used to recommend priority (low, moderate, or high).

Steps 2 to 5 are repeated yearly for topics not selected for review in the preceding year (Figure 3).

AHRQ staff develops the work queue for the next 12- to 18-month cycle using the priority level determined by the Task Force. Other factors that may be used by AHRQ staff in determining the work queue include: availability of research team, availability of review or funds from a non-USPSTF source, efficiency of combining reviews or research teams on related topics, impending release of relevant study, and age of relevant non-USPSTF review.

Inactive topics are topics the Task Force has decided to inactivate for one or more of the following reasons:

Previously inactivated or referred topics are also eligible as new topic nominations, if appropriate, along with other new topic suggestions.

If a topic is inactivated or referred to another organization, the status on the Task Force Web site continues to be listed as "active" for a minimum of 5 years from the date of the original recommendation, unless considerations arise beforehand to change the status. After this period, the status changes to "inactive" or "referred."

2.5 Referring a Topic to Other Organizations

The organization identified for referral should have the resources for timely updates of the evidence and a scientifically acceptable methodology for its evidence reviews (see the list of criteria below). The process for designating a topic for referral is as follows:

The criteria for referring to another organization's recommendation are:

Referred topics may be reactivated through the usual new topic nomination process (described in Section 2.2). 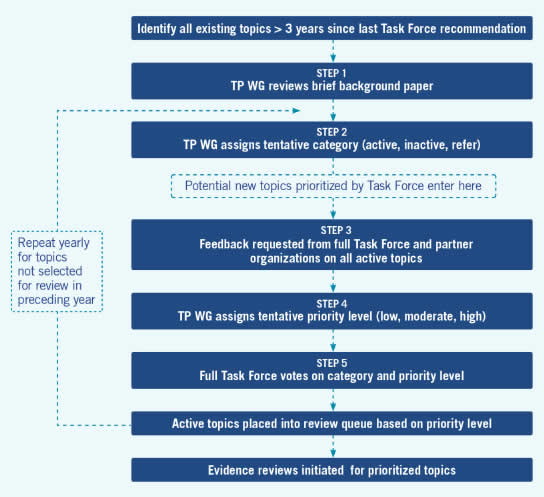 2.6 Consideration of an Early Topic Update

Occasionally a study will be published after a recommendation's release that may potentially affect the Task Force's consideration of the evidence and its conclusions about the certainty and/or magnitude of the net benefit (and the recommendation itself). These studies are brought to the attention of the Task Force by a number of sources, including the public, Task Force members, EPCs, professional organizations (including Task Force partners), and advocacy groups.

A regular audit of information sources is conducted to locate newly published research and/or guidelines that are relevant to topics in the Task Force portfolio. This LitWatch process is described in Appendix III. The Task Force uses the following process to consider new evidence and decide whether a recommendation needs to be updated earlier than the usual 5-year timeframe:

Back to Previous SectionProceed to Next Section

Return to Table of Contents
Current as of: July 2017